Yolo - an app that lets anonymous questions be posed to Snapchat users - has become the most-downloaded iPhone app in the UK and US just a week after its release.

It is highly unusual for an app to top Apple's chart so soon after its launch without a major marketing campaign.

However, the viral success of the product has raised concerns.

Previous anonymous online Q&A services have been blighted by abuse and bullying.

And one UK-based children's charity has said that Snapchat itself might have to intervene.

"Apps such as Yolo that allow anonymous comments could be easily misused to send abusive or upsetting messages," the National Society for the Prevention of Cruelty to Children (NSPCC)'s Andy Burrows told the BBC.

"Snapchat should justify how this app meets their duty of care to children."

A US-based child safety campaign group has also suggested that Yolo's age rating is too low.

Yolo is one of the first apps to have been built using Snap Kit - a software creation platform launched last year by Snapchat. The kit lets third-party developers integrate their products with the social network.

Its name is an acronym for "you only live once".

The app works by letting people post a graphic inviting others to "send me anonymous messages", which is superimposed over a photo.

The post can be sent to a specific set of Snapchat contacts or attached to a Snapchat Story and shared more widely.

Those who see the request can then send an anonymous message via Yolo itself. If the original poster decides to respond, their reply is in turn posted back to Snapchat.

Another app called Piksa offers similar features and is also in the top 50 of Apple's app store chart.

Yolo was created by Popshow Inc, a French start-up previously responsible for an app that let people post their reactions to funny videos.

The BBC has been unable to reach the team involved.

But one of the founders told Techcrunch that the team had not expected Yolo to be so popular.

"It was not supposed to be a success. It was just for us to learn," Gregoire Henrion told the news site.

"We just literally put it in the store, people typed Yolo into search, and the loop was so effective that the product caught on."

Popshow appears to have been mindful about the risks involved.

When first opened, the app shows a warning that states: "Yolo has no tolerance for objectionable content or abusive users. You'll be banned for any inappropriate usage." 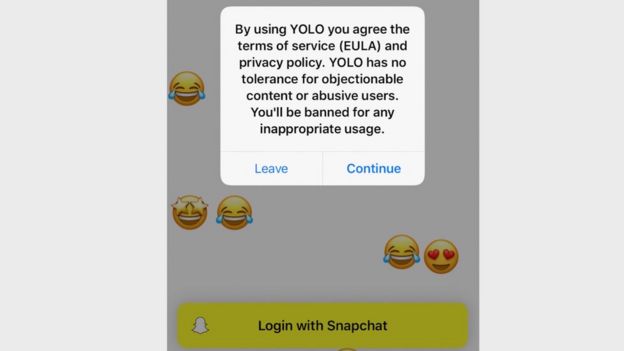 The software has mostly received positive feedback within Apple's App Store, but some users have flagged concerns about whether steps are in place to tackle problems that arise.

One reviewer suggested that the app had been used to send messages wishing others dead, while another said they had been called a "weirdo".

"People will get bullied in this - it's not a good idea," wrote a third.

The creator of Polly - another Snap Kit-based app with anonymity features - tweeted that his team had decided to avoid letting users send incognito posts, because the associated issues were difficult to manage.

6/6 As with any anonymous app, retention, and abuse will definitely be major problems. One of the big reasons we stuck to polling vs open anonymous comment box. Curious to see how Yolo and Snap handle these issues.

A spokeswoman for Snapchat's owner Snap was unable to provide comment.